Today I had to say goodbye to a very dear part of my life. I have always loved animals, but my preference was usually towards cats. However, a little over eleven years ago, I was at the vet’s office with one of our animal brood (I forget which one was under the weather), when I spotted a large box with about five or six sets of pointy ears bouncing around in it. Unable to identify exactly what I was seeing, I moved in for a closer look.

To my great amusement I discovered a box full of Australian Cattle Dog puppies; red heelers and blue heelers (I learned the difference later on that evening). Standard size adorable puppies with the biggest damn ears I’ve ever seen on a dog, proportionally.

I struck up a conversation with the woman who brought them in, and was quickly educated about the breed: two varieties (blue and red heelers), they are herding dogs that originated from Austrailia, favorites of the ranchers. Very smart, loyal, and very very active.

While I was not really looking to add to our menagerie, I couldn’t help but play with them. Their personalities were bright and playful, and while the size of the ears was a bit distracting – it was also a facet that I found adorable.

After obtaining the woman’s contact information, I scooped up the member of the family that was with me and headed back to the house to tell my family of these cool little puppies, in the hopes that they would be charmed by them as I had been.

We set an appointment to visit the pups, and it appeared they won over my wife and children as they had me. I remember them all dancing around us, trying to play – wondering how we would ever make up our minds as to which one we would like to add to our family.

Somehow my oldest daughter settled on a chubby little red heeler, and the decision was done. Welcome to the family… Latte.

I chose his name, as he reminded me of the contents of something I’d find in a cup at the local coffee shop, with his red and white snow capped ears.

The first couple of years were a challenge; these dogs are ACTIVE. However, we had a huge yard at the house we were living in, and the fact that he was a herding dog proved to be useful in getting the younger children in the house for dinner when it was time.

Over the years, he matured. He also showed us just how smart he was. Teaching him something new was rarely too much of a challenge (though I am probably romanticizing that part a bit, due to today’s events). He won the hearts of everyone who came in contact with him.

A handsome, dignified canine that was truly an integral part of this family.

After letting the dogs out for their morning run, I was concerned when Latte didn’t return with the others. I walked outside, and saw him laying in the sun, looking at me… then he tried to stand, and couldn’t. He hobbled on his back legs, and collapsed in the grass.

In the blur of the next few hours, I remember my son immediately coming out to help me; calling the vet and begging for a few minutes between scheduled appointments to have the Dr. take a look at Latte, in the hopes that it was something that could be treated with some pain medication.

In the end, we discovered that his back was betraying him. Maybe a herniated disc, but whatever it was, it was severely painful.

It was time. We had been lifelong friends, and now he was relying on me to help him. I was in the position of having to decide how to proceed. I was always afraid of this moment; would I be able to make the right decision? How would I know what the right decision was?

Then I hugged him. My son had my phone, and grabbed a few pictures of Latte and me at the same office where I had found him eleven years earlier.

Then Latte looked at me, and kissed me – on the chin like he always had. I believe it was his way of saying goodbye. I held him and stayed with him. I knew that he should not have to endure this kind of pain so late in life. So, while looking out the window at the redwing blackbirds surrounding the feeder, Latte left us.

Goodbye, buddy. Thank you for the wonderful memories. Say hi to mom for me. 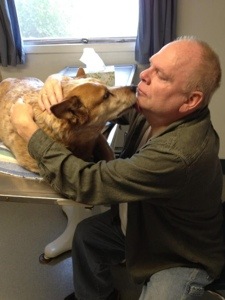 One thought on “A Kiss Goodbye”